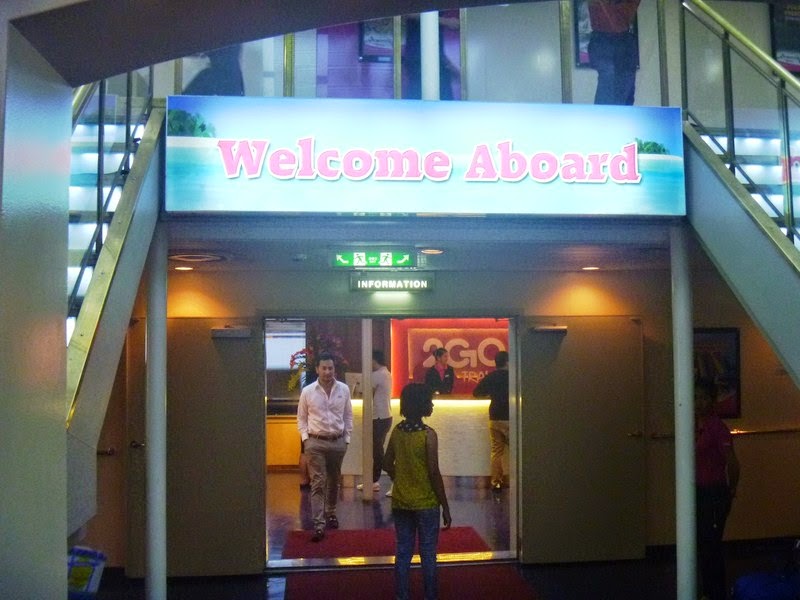 It is also the third ship of 2GO (the other two are M/V Joan of Arc and M/V St. Michael the Archangel) to ply the Manila-Bacolod City (Negros Occidental) route.

Its top man is 50 year old Capt. Leo L. Inocencio, a father of four and 16-year ship captain of 6 ships.

It was acquired in 2013 for US$16 million from a Korean company (it was built in Japan in 1991); dry-docked, repaired, refurbished in Subic for 3 months to become domestic cruise ship (a breakthrough in the local shipping industry).

One of the most technologically advanced ships to dock at North Harbor, the SFX was also equipped with new technology and safety features that pass international standards and impressed the London Protection and Indemnity (P&I) surveyors that reviewed the SFX a day after its maiden voyage.

Aside from the standard 3 radars, automatic radar piloting aid (ARPA), a gyro compass and echo sounders, it also has a Global Maritime Distress System (GMDS), a sprinkler system for passengers, and a water mist system (used to expeditiously control and extinguish  fires and protect shipboard machinery spaces).


As part of 2Go Travel’s “Sarap Maglakbay” slogan, the 2GO group decided to upgrade the SFX (as well as some of its other vessels) to provide the ambiance of a cruise ship, thus giving passengers a more comfortable and enjoyable trip.

Redesigned to look “affordably chic,” its beautiful interiors were exquisitely designed and upgraded by One Urban to become an extravagantly comfortable floating hotel.
It features 4 suites, 12 state rooms, 8 cabins, 8 Business Class rooms and 12 Tourist Class rooms, all of which have ensuite toilet and shower rooms and 5-channel flat screen TVs.  It also has 18 Mega Value rooms, 2 Super Value rooms and a contingency room, all with clean and separate restroom and shower rooms for male and female.

To entertain passengers when they travel between 19 to 25 hours, a bar features a comedy show and other performances.  A multi-events hall, formerly an empty, high-ceilinged space atop the deck, now features a mezzanine floor.

A conference hall during the day, it can be transformed into a 500-pax karaoke club or party area at night.

At its open air deck, guests can converge for island sightseeing and stargazing. Other amenities on board the SFX include spacious, brightly-colored economy and first class restaurants; a relaxing salon and spa; and a 24-hour convenience store.

The ship also serves as a training vessel for students taking up tourism and maritime courses.  It undergoes quarterly and yearly audits and it is accredited with the Maritime Industry Authority (Marina) as well as internationally-certified with the Bureau Veritas and also American Bureau of Shipping.
The SFX serves the Visayas ports of Bacolod City, Iloilo City (Iloilo) and Dumaguete City (Negros Oriental) and the Mindanao port of Zamboanga City (Zamboanga del Sur).

Email ThisBlogThis!Share to TwitterShare to FacebookShare to Pinterest
Labels: Metropolitan Manila, Republic of the Philippines, Sightseeing

To commemorate Jose Rizal's 153rd birth anniversary and the upcoming 101st anniversary of Luneta's iconic  Rizal Monument, a press conference, organized by Prof. Melissa Grace Dizon-Dulalia, launched the "The First Filipino Historical Tour of Europe: Journey to Switzerland," a partnership with the Philippine Embassy (Bern, Switzerland), E.T. Dizon Travel Corp., 2GO Travel, The Hub @ Kilometer Zero, Mario D' Boro Shoes, Cardam's Shoes  and GNN Philippines Uncut Global News Network.
The event was held at 2GO Travel's The Hub @ Kilometer Zero, a 5-in-1 (lounge, cafe, bar, restaurant and ticketing office) for 2GO's  passengers as well as the general public. Fittingly, The Hub is just a stone's throw away from the Rizal Monument and the actual spot where the National Hero Dr. Jose Rizal was executed on December 30, 1896. 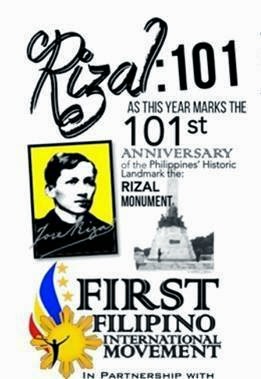 Why Switzerland? From 1905-1907, a design contest for a monument in Luneta dedicated to Rizal was held.  Sculptors from America, Europe and other parts of the world began sending their entries in scaled miniature plaster cast models.

In 1908, the winners were announced and the P100,000 grand prize entry was won by Italian sculptor Carlos Nicoli's Al Martir de Bagumbayan ("Martyrs of Bagumbayan").  It  was, however, not able to post the required sizable performance bond and so the P50,000 second-place winning entry Motto Stella of Dr. Richard Kissling (April 14, 1948-July 19, 1919) of Zurich, Switzerland was used instead.
The bronze statue of Dr. Jose Rizal and the figures around it were cast in Paris (France) and transported to Wassen (a canton in Uri, Switzerland) for mounting and measurement of its rhombic base (of solid Gotthard granite rock), pedestal and 50-ft. high obelisk.   The imposing Rizal Monument was started on December 10, 1910 and was completed on April 26, 1913.  The monument was unveiled on December 30, 1913, the anniversary of Rizal's death, and his remains were finally transferred here on June 19. The Luneta was also renamed Rizal Park, dedicated to the national hero and the values he stood for.


The Hub @ Kilometer Zero: Bulwagan ng Kagitingan (Hall of Valor), Central Section Rizal Park (just across the Rizal Monument and beside the Chinese Garden), Brgy. 666, Zone 072, Manila. Open daily,  8 AM-7 PM.
Posted by Benjamin Layug at 10:00 No comments: Links to this post 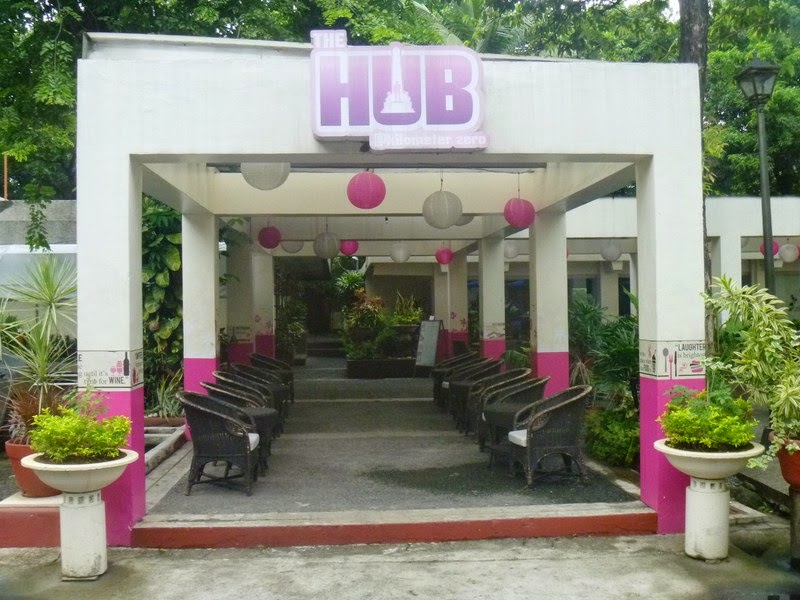 The prices of food and drinks here are competitive. 2GO Travel is the new brand name of Negros Navigation, Superferry, Cebu Ferries and Supercat, the country’s leading passenger ships. 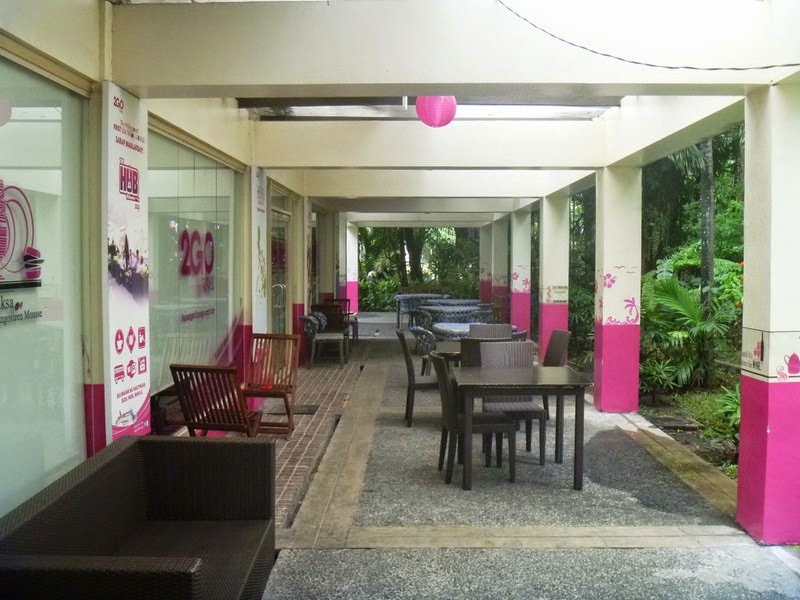 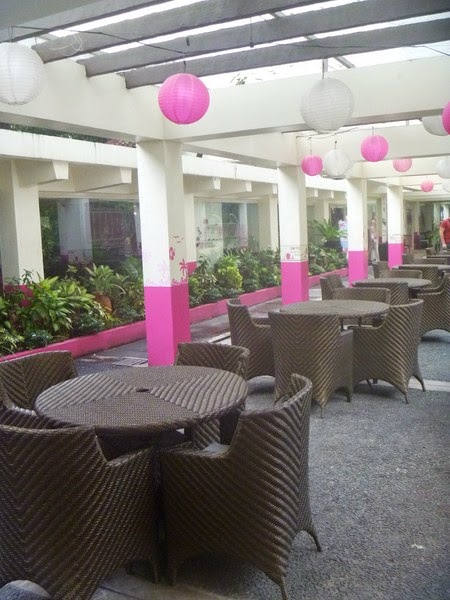 Formerly a revolutionary private entertainment and check-in lounge for 2GO VIP travelers  (the first-ever passenger lounge in the country), it was relaunched to offer a taste of history (it’s just a stone's throw away from the actual spot where the National Hero Dr. Jose Rizal was executed in 1896) as well as dining pleasure for passengers (who may want to party “off board”) and non-passengers (“who just want to chill out”)) alike, similar to the luxury and pampering service provided aboard 2GO's newest passenger cruise ships nationwide.

Definitely a place recommended for hanging out after visiting Rizal Park, Manila's top tourist spot.  Beside it is the park's iconic Chinese Garden. 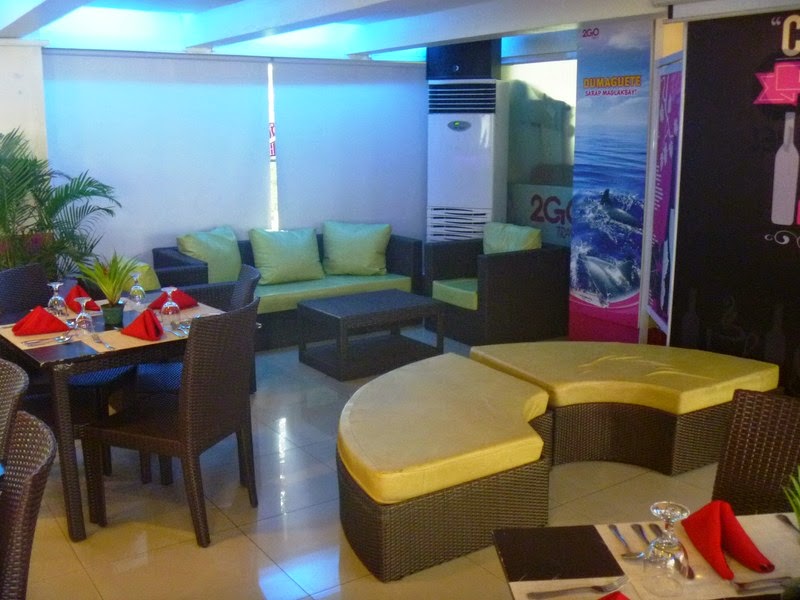 This spacious facility has clean, modern facilities, with comfortable and luxurious rooms furnished with handsome and comfortable lounge chairs and plush seating, glass walls that afford guests an unimpeded view of the surrounding greenery and service that is at par with international standards.

Passengers occupying cabins and state rooms, as well as group passengers, can stay and chill here while waiting for the special free shuttle that will transport them to the ships before boarding time. 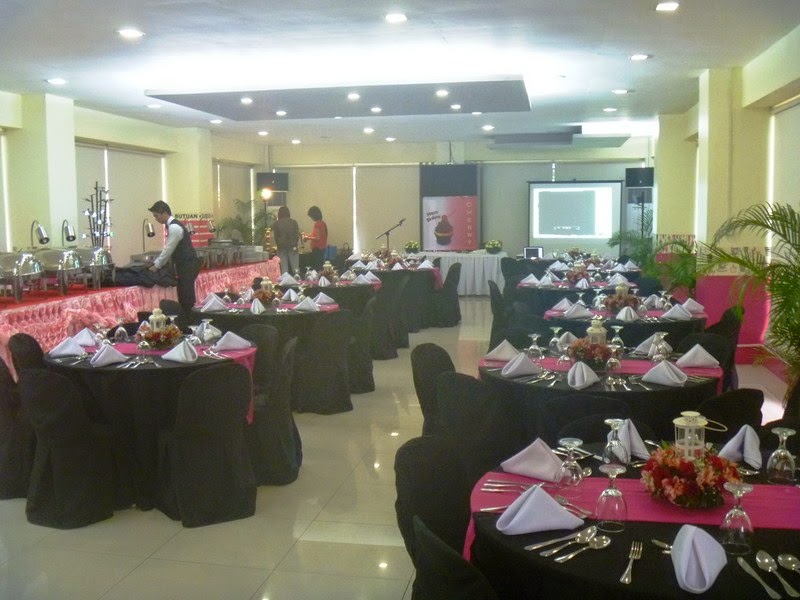 The satellite bar and café, run by expert baristas trained by Mr.Daniel Slakmon (who heads the Hotel Quality and Development Unit of 2GO Travel), a Brit who has been employed in famous international cruise ships as well as private bars, clubs and restaurants, has a menu that offers a variety of refreshments. 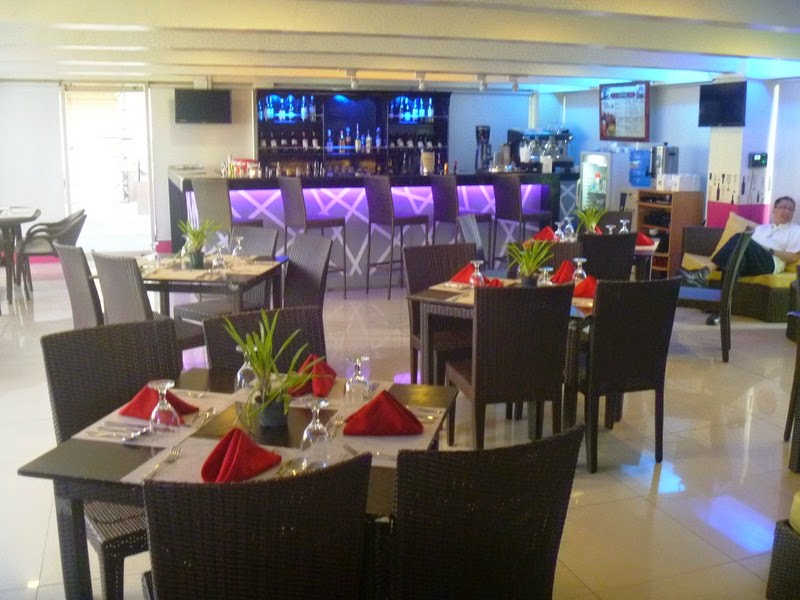 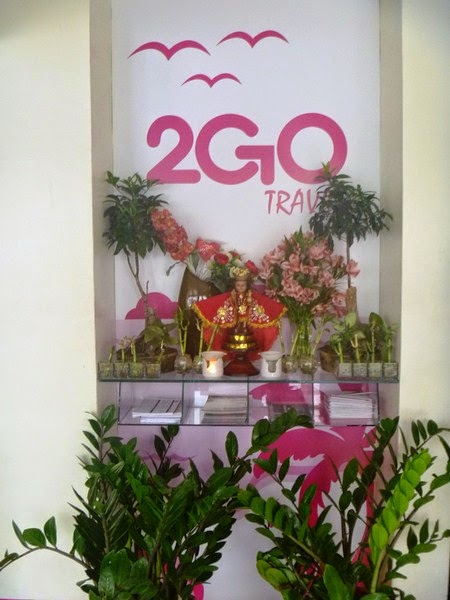