Musical Review: Beauty and the Beast 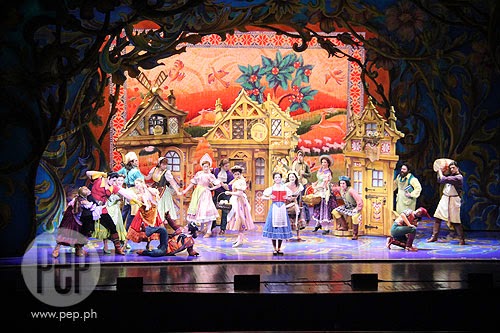 (Excerpt from my article featured in www.pep.ph)

Beauty and the Beast, one of the most successful Broadway musicals of all time, was set to opened last January 9 at the Main Theater (Nicanor Abelardo Hall) of the Cultural Center of the Philippines (CCP) along Roxas Blvd. in Pasay City and members of media were given front row seats to this awesome and unforgettable experience in musical entertainment, based on a delightful and inspiring classic fairy tale (written by Jeanne-Marie Leprince de Beaumont) of love and transformation. Linda Woolverton, screen writer of the original Disney film as well as The Lion King, Alice in Wonderland and The Maleficent, added new scenes to fill out the story for the stage and gave depth to just about every character.

Presenting this original Broadway spectacular in Manila (the first stop in the Asian leg), part of its 10-country first-ever international tour, are Disney Theatrical Productions, NETworks, Broadway Entertainment Group and MKFAE, with Ovation Productions (now observing its 35th anniversary in music and entertainment promotion) as its partner.

The film (a 1991 Academy Award winner for animated feature film) and now musical, Beauty and the Beast, directed by Robert Jess Roth, revolves around the lively, silky voiced Belle (played by Hilary Maiberger), a young, independent, smart but vulnerable woman from a French 18th century provincial town, and the Beast (played by Darick Pead), who is really a young cursed prince who is turned into a beast by an enchantress as punishment for his cruel and selfish ways and forced to live in a hideous form until he finds true love. His servants also share in the curse; they too have lost their human form and have been turned into various household objects. The story goes that if the Beast can learn to love and be loved in return, the curse will end and he will be transformed to his former self.  But if the Beast does not learn his lesson soon, he and his household will be doomed forever.

Beauty and the Beast proved to be a big hit when it premiered at the Palace Theater on Broadway on April 18, 1994 and ran for 13 years, ranking as the ninth longest-running and one of the highest-grossing (grossing more than US$1.4 billion worldwide) Broadway shows of all time.  Since then, the musical has been translated in 8 languages and has logged over 15,000 performances in more than 120 cities and 21 countries. Nominated for 9 prestigious Tonys and 10 Drama Desk Awards, Costume designer Anne Hould-Ward was the only one to take home a Tony for her colorful and resplendent costumes (clothes, make-up, hairstyles and wigs, masks and prosthetics, etc.). 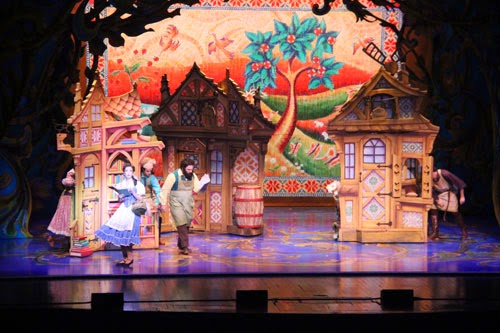 Anne’s interpretations of Belle’s costumes hark back to the film version but remain firmly planted in the musical’s set time, the Rococo period. In the first half of the musical, starting with the panoramic opening with the simple but classically beautiful title song "Belle," she wears a standard-issue Disney heroine drag–an ankle-length skirt topped by a corseted vest and a white, face-framing collar.  As I can tell, the designs for the show have changed over the years while maintaining the same basic shape. In the second half, when Belle finally stepped out in that iconic, yellow dress, the audience actually gasped.

When a character walked on stage, we immediately knew something about the character through his costume, telling us if the character was male, female or animal. The clothes also indicated the nature of the characters in the musical - their stations in life, their age, occupations and personalities.  The introverted Beast’s costume, donned with style as he goes roaring and growling while he stalks and leaps about the stage, told us that he had become more animal than human but it also told us that he was still a Prince who was just imprisoned in the body of the Beast.

The personality traits of the bicep-tular Gaston (played by Alan Dietlein), a show stealer, are reflected in the color, fabric choices (Gaston does not wear silk or velvet), the line of the costume (fabric does not drape on his body - he is poured into the costume), and the costume accessories such as his wig.  The colors, line and fabric of the candle-handed Lumiere’s (played by Hassan Nazari-Robati) and his lady love Babette’s costumes indicated that there was a relationship between these two characters.

Many of the characters in the Beast’s castle appeared in costumes that indicated they had been turned into enchanted objects. Anne succeeded in her task of making an actor look like a wardrobe or candelabra, coming up with a look for the enchanted objects which would work on stage.  On stage, we saw them at several stages of the transformation as they slowly turn into these objects.  Many of the actors playing servants wore costumes that used a system of wires for support of their heavy garments. The costumes also made it possible for the actors to move or dance freely, make a quick change from one costume to another, or to make a change/transformation on stage in front of the audience. 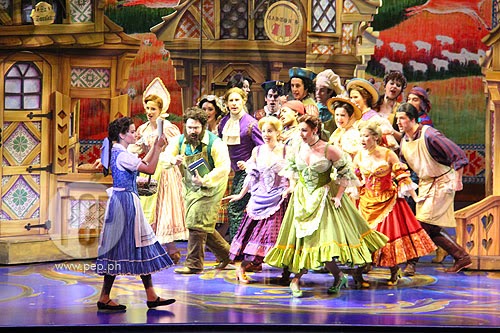 The element of scenic design was also a very important element in the staging of Disney’s Beauty and the Beast. Visually, the stage design by Stanley A. Meyer very much followed the film version of the story in its vibrant use of line, color and texture to help set the tone and style of the production. The two-dimensional look of the set also appropriately conveyed the fairy tale origin of the story. 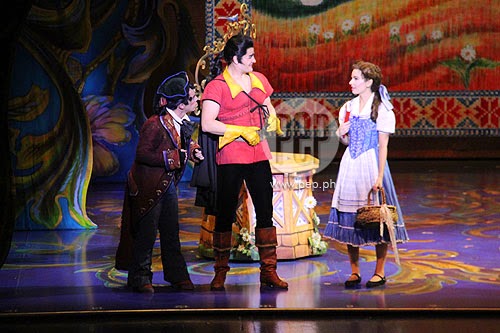 The evocative set design played a critical role in this stunning spectacle that left us in the audience totally immersed. The vivid and ornate scenery, working together with all production and performance elements, created artistic consistency throughout the play. For example, the bright reds, orange and yellow of the early village scene are consistent with the happy, playful upbeat songs and dance numbers presented early in the play. 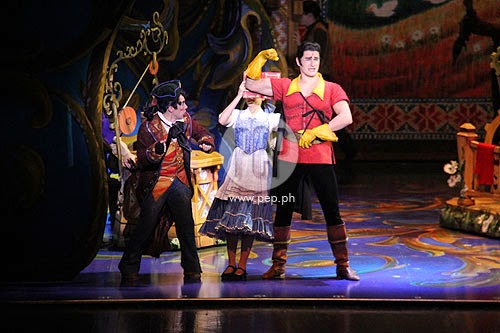 The assortment of beautifully designed stage backdrops covers every critical scene, giving options that range from Disney-esque scenery to drops that depict realistic settings.  It lends itself to a variety of different scenic interpretations, bringing color to the stage and complimenting the cast.  Architecturally accurate backdrops that easily transform the stage itself, with a little added creativity and a spark of ingenuity, include the Medieval Street, Baroque windows and Rose Terrace. 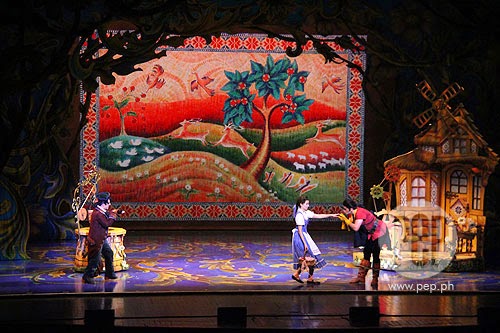 Spurred on by Gaston, the mood of the villagers turns ugly in Act II as they attacked the Beast’s castle. This mood is reflected in a change of costume consisting of dark, somber colors, diffused shadowy lighting, and sharply angular sets that elicit a sense of foreboding. The set of the Beast’s castle is large and grandiose with curved arches, flights of stairs, many rooms, etc. The castle also has gargoyle statues and is cast in darkness. In the film version of Beauty and the Beast, villages, houses, castles and forests appear and disappear rapidly. This smooth transition from place to lace reinforces the fairy tale origin of the story.  The visual aspects of light, color, line (vertical, horizontal, circular, etc.) and texture (smooth, rough, etc.) affect the mood of the musical dance number called “Be Our Guest.”

The original animated, Oscar-winning film score, with the music of Alan Menken (The Little Mermaid, Aladdin, Tangled) and lyrics written by the late Howard Ashman (The Little Mermaid, Aladdin), was expanded to include 7 new songs with music by Menken and lyrics by veteran Tim Rice (The Lion King, Jesus Christ Superstar). They include the dramatic “Home,” Belle’s song of determination where she pours her heart out in her lusciously rich voice, pure in tone and smoothly emotive; “Me” that tells you everything you might need to know about Gaston; the pained “If I Can’t Love Her,” the Beast’s way of showing his yearning and loneliness; and “Human” which again conveys the passage of time and continued hope. All the new songs are integrated so as to appear both familiar and new. We in the audience can relate to the characters through the music. 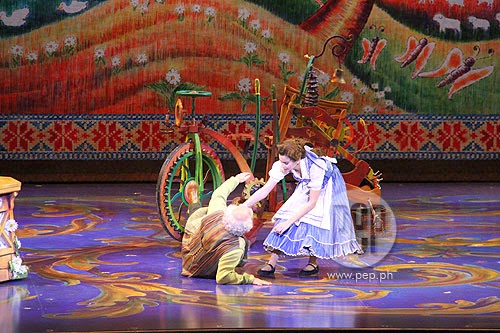 The choreography (by Matt West) in the "Be Our Guest" costume and dance parade, led by Lumiere was, in every way, like the spectacle it was in the classic Disney movie.  The dazzling, dancing dishes, the back-flipping carpet, and the enchanting spoons, knives and forks showed off a lot of breathtaking soft shoe moves in this glitzy vaudeville number. An unexpected percussive performance was the “Gaston” segment’s on-point clanking of tankards, an idea of sound designer John Petrafesa, Jr., drew a major round of applause and cheers from this Friday afternoon’s audience.

John also created special sound effects such as thunder, the sound of wind and falling rain plus the sound effects which accompany every time Gaston’s lackey Lefou (played by Jordan Aragon) was hit, pounded, tripped or thrown by Gaston.  Incidental music was also frequently played to underscore or set a tone or mood for the action. To augment the stage voices, actually more difficult than it appears, the performers wore body microphones so that their voices could easily be heard by everyone in the main theater.

The main actors are also supported by a strong, solid cast noted for their gorgeous voices and a natural, breezy stage presence.  They include James May (as the tightly wound Cogsworth, the clock), Emily Mattheson (as the warmly maternal Mrs. Potts), Paul Crane (as Maurice, Belle’s father), and Charlie Jones and William Poon (the kids who alternate as Mrs. Potts child, Chip). Completing the original Broadway creative team on the tour are Natasha Katz (lighting design) and Michael Kosarin (music supervision).

From the start, the audience was quickly drawn into the action, with the focus moving between Belle, Gaston, the Beast and the Enchanted Objects as the musical moves from scene to scene. These unique and memorable characters, some truly unusual, managed to connect with the audience through familiar personality traits and their actions on stage add more depth through gestures, tone of voice and the pacing of the action.

All throughout, we got swept away in the carefully developing love story, laugh (or at least cracked a smile) at the jokes and even experience an occasional chill up our spine.  If you're looking to capture the imagination of your children or your young grandchildren with a "tale as old as time," then this enchanting and enormously effective musical show is for you.
Posted by Benjamin Layug at 14:30 1 comment: Links to this post