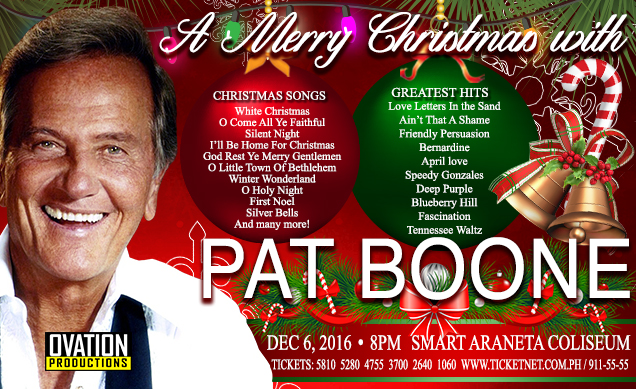 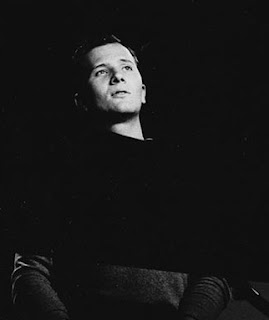 Christmas is just around the corner and what better way to spend the holidays than to catch legendary American singer, composer, actor, writer, television personality, and motivational speaker Pat Boone as he holds a special, one-night-only Christmas concert (entitled A Merry Christmas with Pat Boone)  in Manila, presented by Ovation Productions, on December 6, 2016 at the Smart Araneta Coliseum (the Big Dome) in Cubao, Quezon City.
With a musical career that spans over 5 decades, Pat will take center stage in his trademark white buck shoes, perfectly combed hair and a gleaming smile on his handsome, clean-cut face as he spreads holiday cheers to his Pinoy audience. The new millennium saw the singer turn out regular releases featuring a diverse batch of albums that included Christmas songs, most of which are in his playlist.

Backed up by a 20-man choir, Pat will also be joined by special guest half-Filipino, half Dutch Aliya Parcs, famous for her song “Stop Think,” the official soundtrack of the Filipino rom-com movie, Bcuz of U, which was aired last 2004.
During the concert, he will perform his most popular Christmas carols such as White Christmas, Silent Night, Silver Bells, I’ll Be Home For Christmas, O Little Town Of Bethlehem, O Come All Ye Faithful, O Holy Night, Winter Wonderland, The First Noel, Silver Bells, God Rest Ye Merry Gentlemen, and many more.

The album collection also includes patriotic standards, a tribute to the Ink Spots, classic R&B songs and 2015’s “Pat Boone’s Favorite Bible Stories & Sing-Along Songs.”  He will perform his greatest hits such as Ain’t That A Shame, Friendly Persuasion, Bernardine, Speedy Gonzales, Blueberry Hill, Love Letters In The Sand, April Love, Deep Purple, Fascination, Tennessee Waltz, among others.
Arguably the best crooner of his time, Boone made his professional recording debut in 1955 and his career attained greater heights when he set several new records in music and entertainment that have remained unsurpassed until today. He has sold 45 million records, had 38 Top 40 hits and appeared in more than 12 Hollywood films.
Pat has been listed by Billboard as the second biggest charting artist of the late ‘50s, behind only Elvis Presley and ahead of Ricky Nelson and The Platters. In the magazine’s listing of the Top 100 Top 40 Artists for 1955-1995, he was also ranked at No. 9 – behind The Rolling Stones and Paul McCartney but ahead of artists such as Aretha Franklin and The Beach Boys. He still holds Billboard’s record for spending 220 consecutive weeks on the charts with one or more songs each week.
Tickets are priced at PhP5,810 (VIP), PhP5,280 (Patron A), PhP4,755 (Patron B), PhP3,700 (Box), PhP2,640 (Upper Box), and PhP1,060 (General Admission). Tickets are available at Ticketnet outlets nationwide and via online at www.ticketnet.com. For info, call Tel. No. 911-5555.
Posted by Benjamin Layug at 03:23 No comments: Links to this post