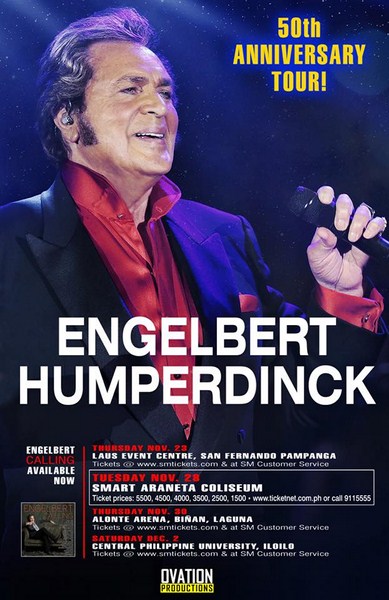 British singer and international music legend Engelbert Humperdinck, one of the finest middle-of-the-road balladeers and hottest male pop idols of the 1960s, returns to Manila (his last visit here was  a one-night-only concert on July 10, 2016 at the Smart Araneta Coliseum) to relive the classics and reminisce as classic pop and ballad enthusiasts celebrate with him in his 50th Anniversary Tour, a global touring celebration of a successful half century in the music and entertainment industry of the singer, with stops in major cities in the United States, United Kingdom, other parts of Europe, and Asia, including the Philippines.

The four-date, four-city pre-Christmas concert event series begins on November 23 in the Laus Event Centre, City of San Fernando, Pampanga, November 28 at the Smart Araneta Coliseum, November 30, 2017 at the Alonte Arena in Biñan, Laguna and on December 2 at the Central Philippine University, Iloilo City  in Iloilo. This event is made possible by Ovation Productions.

With the outrageously memorable name of Engelbert Humperdinck (after the Austrian composer of the 19th century opera, “Hansel and Gretel”), and with his deep voice and thick sideburns, he burst into the music scene in the ‘60s along with The Beatles, The Rolling Stones and Tom Jones, and was catapulted almost instantly to the status of world icon.

In the last four decades, he has generated sales in excess of 140 million records, including 64 gold albums and 35 platinum, four Grammy Awards nominations, a Golden Globe Award, and stars on the Hollywood Walk of Fame, Las Vegas Walk of Fame, and Leicester Walk of Fame. Humperdinck has performed for Queen Elizabeth II four times, several presidents and many heads of state as well as  toured the world before sold-out crowds in Great Britain, United States, Australia, Germany, Belgium, Canada and Southeast Asia.

He has recorded everything from the most romantic ballads to movie theme songs, disco, rock, and even gospel. With his sense of humor and self- deprecating jokes, Humperdinck has endeared himself to fans and, after appearing on MTV several times, has managed to strike a new chord with a younger generation.

Engelbert became great friends with Elvis Presley and the two legends often performed each other’s songs. His first single in the charts was “(Please) Release Me,” which was No. 1 in 11 countries and went into the Guinness Book of Records for achieving 56 consecutive weeks on the charts.  The following decades saw Engelbert touring the world to sell-out crowds.

Humperdinck’s inimitable three-and-a-half octave range and ultra-smooth onstage charisma, captivating fans of every generation in many parts of the world, was subsequently hailed by The London Times as “the premier voice of the 20th century.” His sweet, powerful voice has been immortalized in timeless tunes loved by many Filipinos and fans worldwide like “(Please) Release Me,” “The Last Waltz,” “Am I That Easy To Forget,” “After The Loving,” “Man Without Love,” “The Way It Used To Be,” “There Goes My Everything,” “Spanish Eyes,” “Love Me With All Your Heart,” “Can’t Take My Eyes Off You,” the unforgettable “Quando, Quando, Quando,” and many more.

Posted by Benjamin Layug at 22:58 No comments: Links to this post

For the second time around, lifestyle bloggers were invited to another Wine Blogging Media Night "Prelude to the 17th Grand Wine" at the Wine Museum Hotel & Resto where we were to listen to presentations of wine industry players.

Upon arrival, we were welcomed by Mr. Ronald "Ronnie" Lim Joseph (Director) and Ms. Dawn Rosary Ignacio (Off-Trade Head), both of Philippine Wine Merchants (PWM), one of the biggest wine importers and distributors in the country and organizer of the 17th Grand Wine Experience  to be held on November 24, 2017, Friday, 5 PM at the Grand Ballroom of the Marriott Hotel, Newport City.

According to Ms. Apostol, Casillero del Diablo, a widely recognized premium brand of Chilean wine which means the “devil's cellar,” was so named because winery  founder Don Melchor de Concha y Toro, spread the myth that the devil lived in the cellar to prevent theft. 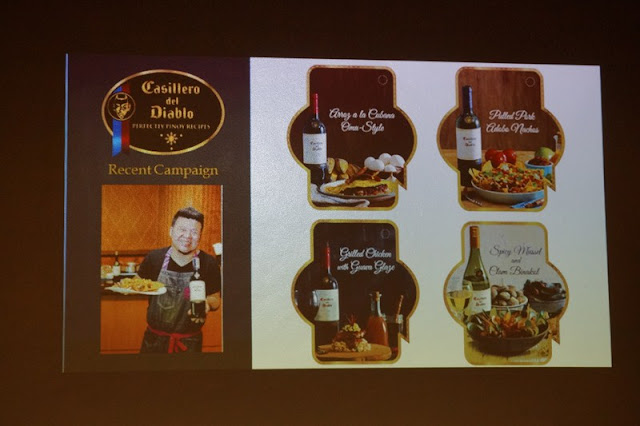 A recent campaign of Casillero del Diablo was a Filipino food pairing project with highly acclaimed celebrity chef-host Sharwin Tee, the first-ever winner of Lifestyle Network’s reality cooking show “Clash of the Toque-en Ones” and host of “Curiosity got Chef,” as its newest ambassador.

To introduce this Chilean legend to the casual Filipino wine drinker, Sharwin spiced up the wine and food pairing by cooking hearty Filipino dishes (Arroz a la Cubana, Pulled Pork Adobo Nachos, Grilled Chicken with Guava Glaze and Spicy Mussel and Clam Brisket), one of his specialties, with Casillero del Diablo itself.  Four of Casillero del Diablo’s wide selection of wine varietals were presented. 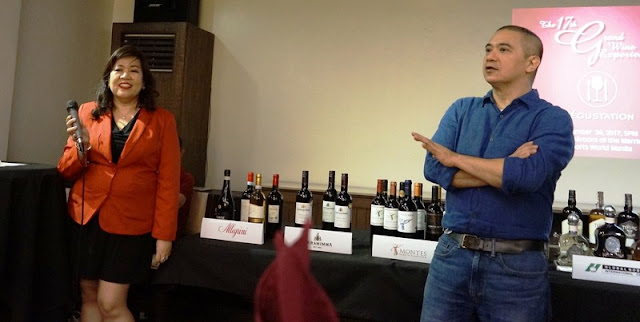 ·        The Casa Noble Tequila Anejo, an exquisite, limited production tequila beautifully contained in an artisan purple glass decanter, matured in French white oak barrels for two years and extra aged to perfection, exhibits a deep golden tone, has an exceptional bouquet and body, and ranks among the finest distilled spirits in the world.
·         The Casa Noble Tequila Blanco, a “crystal,” unaged blanco tequila, is a pure agave spirit, packed full of peppery flavor, distilled and then bottled without any contact with wood.
·         The Casa Noble Tequila Reposado, an exquisite, smooth, sensuous and full bodied 100% Agave tequila produced at La Cofradia in Jalisco, Mexico, is matured in French white oak barrels for 364 days. This tequila is contained in a beautiful hand blown cobalt blue bottle, adorned with an exquisite pewter engraved label and top. This we sampled with the Casa Noble Margarita cocktail that was served to us. 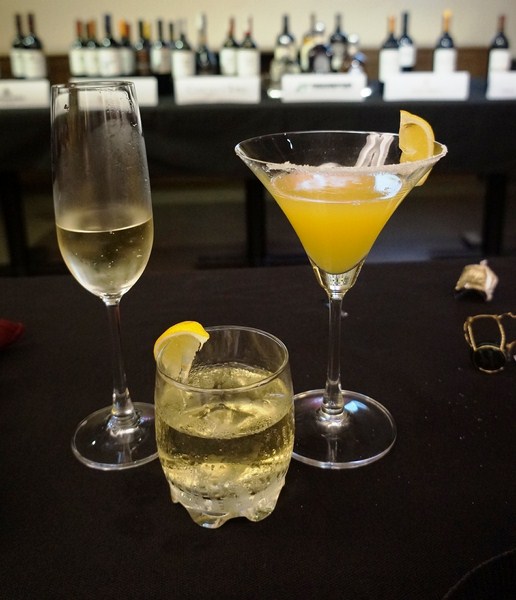 ·         The Teeling Whiskey Single Malt Irish Whiskey, a rich and spicy whiskey aged for up to 23 years, are matured in a range of wine casks: sherry, port, Madeira, white Burgundy and Cabernet Sauvignon.
·         The Teeling Whiskey Single Grain, released in 2013, was matured full term in Californian Cabernet Sauvignon wine barrels, resulting in a spicy and fruity whiskey.
·        The Teeling Whiskey Small Batch, a delicious small-batch blend with a very high malt content is, interestingly enough,  also been matured in rum casks for added spice. This whiskey was the centerpiece of  the very refreshing leprechaun, a classic and sophisticated American cocktail which was served to us. 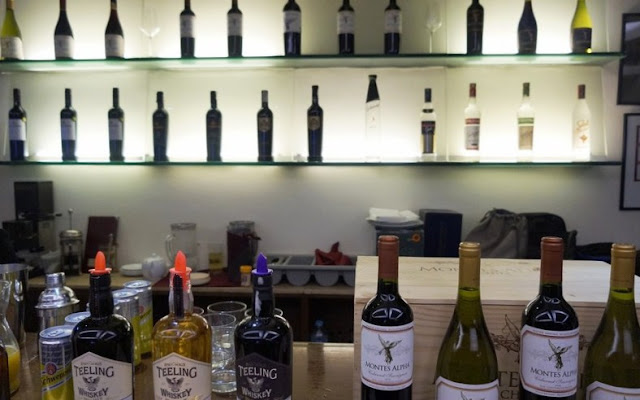 According to Mr. Broncano, on October 2013, GNIC, seeing the growing trend of online selling in the Philippines, launched www.Gurkka.com, an online deal site for wines and spirits product line plus wines accessories (e.g. wine glasses, cork screw, etc.) and other luxury items (e.g. apparels, restaurant vouchers, gadgets, hotel accommodations, etc.) It is the first wine and spirit deal site in the Philippines where members get freebie packages and discounts with purchases, earn points and redeem rewards.   Other wines were also on display during the press conference:

STOLICHNAYA
·         The classic Stolicnaya Gold is a great, double-distilled and incredibly smooth Russian vodka made from wheat and rye that is fantastically smooth yet delightfully characterful and complex. In 2008, it was awarded a Gold medal at The Vodka Masters.
·        The Stolichnaya Salted Karamel, the world's first salted caramel-flavored vodka, offers the perfect balance of sweet and savory. With a creamy-silky textured mouth-feel, it has a finish that is rich and warm, with lingering caramelized sugar and English toffee notes, balanced with a light saltiness that draws out the caramel for a taste that is completely delicious.
·         The Stolichnaya Gluten Free Vodka, distilled from corn and buckwheat, is completely gluten-free but still maintains the flavor that has made Stolichnaya famous.
·         The Stolichnaya Minibar Pack includes Stolichnaya's Classic Vodka, Stoli Vanil, Stoli Ohranj, Stoli Razberi and Stolichnaya Blueberi.


MARQUES DE MURRIETA
·         The Marques de Murrieta Rioja Reserva 2011, an energetic tempranillo from Rioja, Spain, has an intense bright cherry red color and boasts ripe red fruit attributes accompanied by a subtle and creamy oak and lots of spices.
·         The Marques de Murrieta Gran Reserva 2009 has a dark, intense red brick color with a mature aroma of mellow red and dark fruits with hint of spicy oak.
·         The Dalmau Reserva 2012,  a premium, limited-production Spanish red wine  aged 18 nonths in French oak barrels from Allier and another 12 months in the cellar prior to its release, is made from a blend of 70% Tempranillo, 15% Cabernet Sauvignon and 15% Graciano.

BODEGAS ARZUAGA NAVARRO
·         The Arzuaga Ribera del Duero 2011, a tempranillo from Ribera del Duero, Spain, has a blend of 95% Tinto Fino, 3% Merlot and 2% Albillo. Clean and bright, ruby red and shades of purple. Great aromatic intensity, complex and elegant, with notes of compote of red fruits of the forest, well assembled with the tertiary aromas of a clean and subtle barrel, leaving in retronasal hints of smoked and roasted. Enveloping and structured, with great unctuousness marked by its sweet tannin. Sensations silky and prolonged aftertaste.
·        The Arzuaga Crianza 2013, a single varietal tempranillo made from grapes coming from several plots scattered over the Ribera del Duero region, Spain, is aged 14 months in half French and half American oak barrels.