Surf Shack, located behind Moonleaf Tea Shop and directly across the National Highway from San Juan Surf Resort, is a low-key yet awesome bar and restaurant with a very laid-back setup.

It’s a perfect open-air hangout spot for sun, sea and surf worshipers as well as casual diners, with a cool setting of outdoor tables with candles; hip and colorful seats; trees; good acoustic music for relaxation; photos of surfers and surf boards on display along walls lined with horizontal wood planks.

The diners are protected from the elements by a clear plastic roof above their heads. The band area is located on the far side of the room. 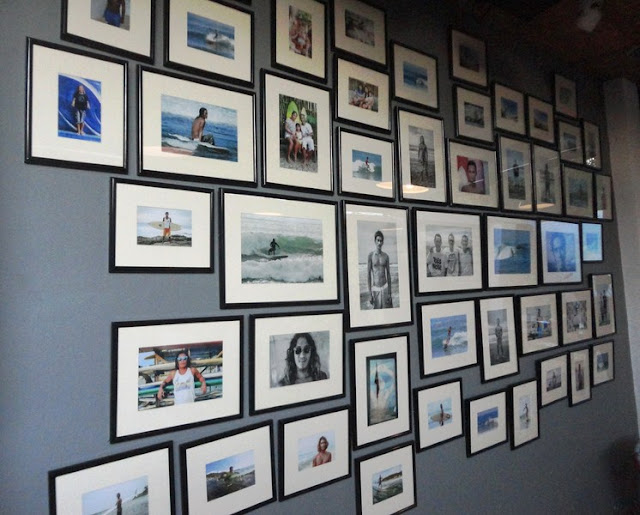 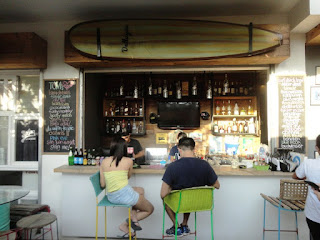 Surf Shack is known in the surf community for its sumptuous but very affordable (most of their meals are priced below PhP300) comfort food served in generous portions.

During our visit, we tried out some of their bestsellers.  The Buffalo Wings Bucket (PhP258), consisting of 8 pieces of New York-style, deep-fried chicken wings dunked in their original and very tasty BBQ sauce, was super.

Then there’s the local chef’s rendition of Italian brick oven pizza and pasta dishes, putting a unique twist by using local ingredients such as bagnet, tuyo, longanisa and the like.

The Golden Tinapa Pesto Pasta (PhP278), with fresh basil pesto, olives and capers had, as its piece de resistance, golden tinapa flakes trickled with Parmesan cheese and chopped cashew nuts. The Vongole Blanco Pasta (PhP298), a favorite of mine, had spaghettini swimming in locally sourced Pacific clams sautéed in white wine and cilantro.

The Bacnotan Longanisa Pizza (PhP258), with tomato concasse, a small slice of very savory Bacnotan longanisa and a fresh egg in the center balanced on a thin and crispy crust “board," was surprisingly cheesy and good.

Surf Shack also had e a great cocktail and drinks list, with original cocktails and even imported beers such as Blue Moon (with a slice of orange) on hand.

The Bang Da Base (PhP158) we drank, a Surf Shack specialty served in mason jars, is a cocktail drink made with basi (sugar cane wine).

Their signature beers (Amber wheat and Blonde) were smooth and great.  Water was served, with a slice of lime, on cute recycled mayonnaise jars.

The La Union Surfing Break, the biggest annual surfing event by volume in the Philippines, is now on its 10th edition. Among the other well-known surf sites in the country, the beach cove of Urbiztondo, San Juan in La Union is the most accessible for sun and surf worshipers coming from Metro Manila, turning it into one hot summer getaway.
In the past 9 years, the event was a huge success beyond expectations and, despite the addition of three more hotels this year, experience has, in the past, shown that a large chunk of attendees of the surfing break cannot be accommodated in San Juan-based hotels, necessitating tourists to consider nearby hotels in San Fernando.

The La Union Surfing Break, a project of the Department of Tourism and the La Union Information and Tourism Office, is all about surfing.  It was first conceptualized and launched in 2006 and, over the past decade, it has significantly altered the lives of locals in San Juan.  It aims to educate and expose surfing to the general public through proper teaching methods. From five surf instructors, before the first surfing break, the number spiked to 110 instructors as of latest count. Each instructor earns PHP400 per hour per client.  The event’s target markets are students from Metro Manila, Baguio City and other Northern Luzon provinces. 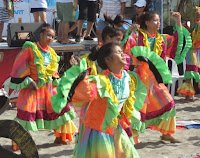 This year’s event, held from October 30 to November 1, expects at least 3,000 to 4,000 people a day celebrating and riding the famous waves of San Juan.  The three-day event’s festivities kicked off, in a festive atmosphere, on the morning of October 30 with a street dancing competition, followed on the same day by a surfboard design contest and surf clinics. Sandcastle building contest and a sundown fun run will form the schedule of October 31. 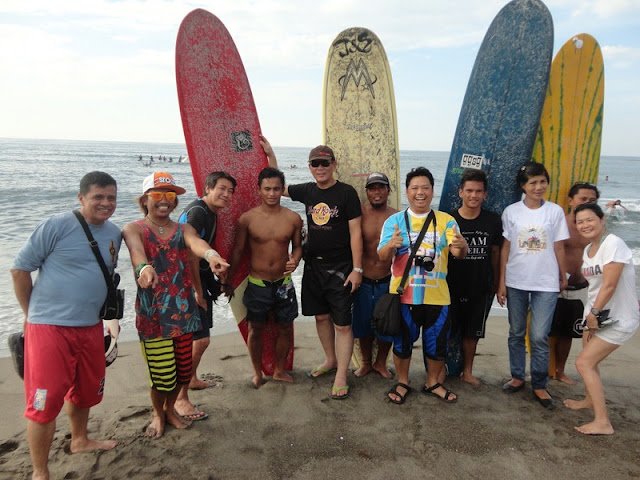 On November 1, organizers will prepare a trick or treat costume contest for both adults and kids, henna tattoo design contest, and face and body painting contest. The closing ceremony and much awaited beach party and fireworks display will be held in the evening, starting at 8 PM. The event will also feature photography contests, surf board design contest, fun  art exhibit, surfing competitions, beach volleyball tournaments, and zumba sessions. Admission to the La Union Surfing Break is free.

Posted by Benjamin Layug at 08:00 No comments: Links to this post 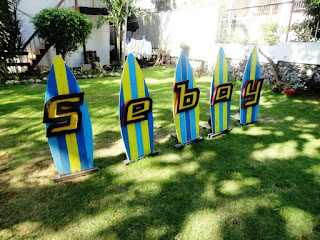 The family-run Sebay Surf Central Resort, ideally located in the heart of the surfing capital of Urbiztondo, San Juan, is considered by many as one of the premier surf resorts in Northern Luzon.

They have plenty of parking space and they accept major credit cards. It's right along the main highway so it is easy to find.

The resort, owned by Atty. Rodolfo V. Yabes and Mrs. Godofreda Yabes (Sebay is Yabes in reverse), is one of three pioneer resorts in Urbiztondo Beach (the others are Monaliza Surf Resort and Hacienda Peter's Beach Resort).  It has 24 rooms within 3 buildings named after each of the couple's children - Rhoda (the oldest building), Regina and Raissa.

Each year, surfers flock to enjoy the 6-7 months of surfing beginning in October and ending in April. Throughout the year, various tournaments and competitions are also held right in front of Sebay.

The gray sand beach was clean and great, with lots of waves for surfers, but there are a few jellyfish present during certain times of the year, so do be careful. If you want to swim, do it in the morning or brave the afternoon sun. By 3-6 PM, you'll have a lot people learning to surf. 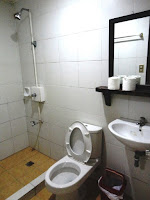 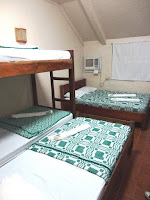 Sebay Surf Central offers airconditioned, modern or native-style rooms for all types of groups, be it a couples room, a family room or a big group "barkada" room with double deck beds.

Rooms have cable TV (reception though is poor), wi-fi connection (however, signal is better in the restaurant and lobby) and tiled private bath (their water supply is sometimes a problem plus there’s no hot water and shower curtains). Don't expect high-end looking rooms, but rooms are clean, comfortable and space is just enough. 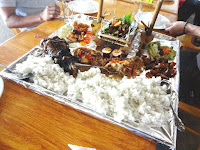 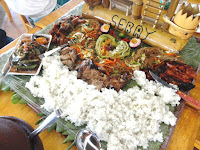 The resort has two food and beverage outlets.

Mama’s Canteen, which caters to motorists and budget-conscious people, offers 24-hour fast food and cable TV.  It also has a convenient store for grocery items you need to buy. 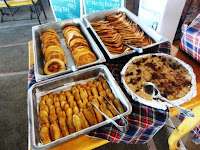 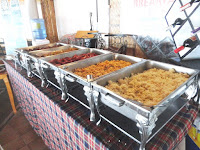 The seaside Fat’s Bar ‘n Grille offers a wide variety of sumptuous, delicious but affordable food. For breakfast, they offer a simple buffet of scrambled eggs, hot dog, hotcakes, French toast, fried rice, biko (rice cake), Vigan longanisa, etc.).  For lunch and dinner, they offer boodle fight meals consisting of grilled pork, fish and chicken, pinakbet, pansit and steamed rice. Every Friday and Saturday nights, they offer live acoustic band music, making it a nice spot to chill and kill time. However, it makes it difficult for anyone in the nearby cottages to sleep. 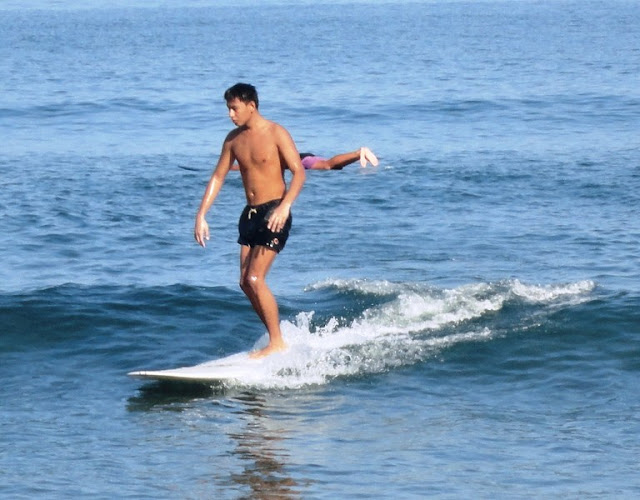 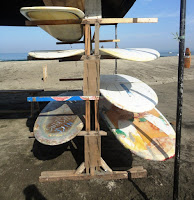 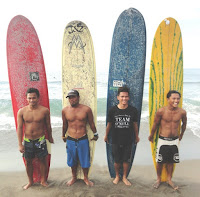 Wine-making is a period of romance between disparate elements such as the sun, rain, wind, earth and man whose confluence can, under just the right conditions, produces poetry in a bottle we call wine.

Ancient cultures and societies has usually ascribed divine properties to wine and have venerated deities and historical figures connected to wine.

Since its inception at the turn of the 20th century, the Grand Wine Experience has raised its glasses to the magic of wine-making, transforming itself from a humble gathering of wine enthusiasts into a very exclusive group featuring its already staggering and still growing line-up of over 500 wines and spirits.

It has also become the longest running wines and spirits event in the country and the only event where all the major wines, spirits and beer brands are best represented.

Founded by the four Joseph brothers (Ralph, Robert, Ronnie, and Raymond) of Philippine Wine Merchants, the Grand Wine Experience is widely regarded as the “biggest, most spectacular, most lavish and most anticipated wine and spirits event of any kind in Southeast Asia” and it is the only event of its kind where food is served from start to finish.

Through the years, the event became bigger and bigger, with all the players in the wines and spirits industry as well as bon vivants, celebrities, dignitaries, top executives and members of high society, looking forward to participate in this monumental annual pilgrimage.

Aside from hitting the 15th milestone year of the event, they are also celebrating the 40th anniversary of Philippine Wine Merchants, the company behind it, which was founded in 1975.

To cater to an exponentially larger audience, this year also marks their move to the significantly more spacious and new, 8,000 sq. m. Marriott Grand Ballroom, the Philippines’ largest ballroom, which was just inaugurated last July 1 of this year and is double the capacity of the previous Marriott grand ballroom.

With a ticket price of PhP5,000, you can drink-all-you-can from their featured selection of more than 500 wines, beers and spirits from over 23 different countries and feast on sumptuous eat-all-you-can buffet selection.

With improvements in every facet of the guest experience, from the buffet selection to the quality of the entertainment, with a greater number of wines and spirits to choose from compared to year’s past, this year’s edition of The Grand Wine Experience aims to shatter and surpass all expectations, ultimately giving guests more value for their money while having the best time of your life.

During a press launch held at the Hub of Marriott Hotel, members of media were given a taste of this food and wine experience.